What Kinds of Damages Can I Recover After a Car Accident? 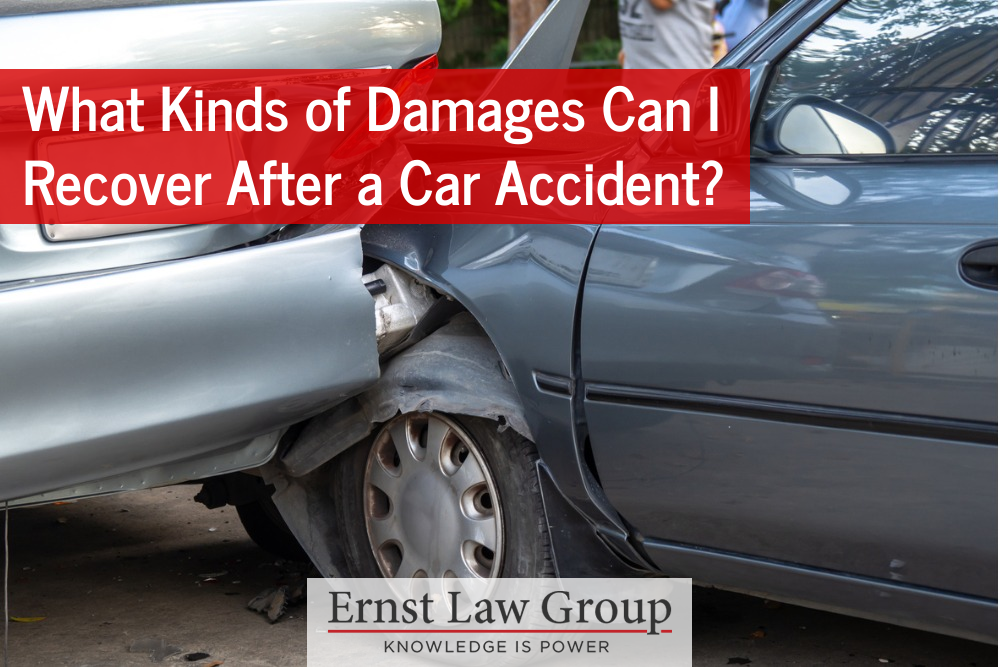 California law allows for victims of car accidents to claim damages against negligent parties. Negligent parties refers to those who are determined to be at-fault for the accident and liable for the damages that directly resulted.

Unlike some states, California does not restrict or place monetary limits on personal injury lawsuit damages. Individuals can claim all legitimate costs they incurred as a result of the accident. These damages typically include compensation for their medical bills, vehicle damage, property damage, lost income, and the incidental costs of the accident in general.

Injured individuals may also be able to claim “general damages,” which refers to compensation for pain and suffering, permanent disfigurement, and permanent injuries or loss of limbs. However, injury victims should note that California has what’s known as a “comparative fault” law. This law means that if you are partially at fault for the car accident that caused your injuries, your total damages award will be reduced by the approximate percentage of fault you contributed.

The total costs of car accident damages can be devastating. According to one study, car accidents in the U.S. cause $871 billion in damages annually — around $900 per person. That figure includes a sizeable portion of medical bills as well as property damages costs. The lingering costs of loss of life, pain, or decreased quality of life was estimated to be $594 billion.

Don’t get stuck thinking you can shoulder the hefty costs of your car accident alone. You can choose to file a claim or a lawsuit against all negligent parties with the help of a San Luis Obispo car accident lawyer. Your claim can include the following common types of damages assessed after car accidents in California.

Medical bills are likely to be the most significant costs car accident victims must face following their injury. According to one study, Californians spent $292 billion on healthcare costs in 2012 — equivalent to $7,549 per person. These astronomical costs can easily increase when someone has incurred a major injury during a car accident.

A medical bills claim can help you seek to recover all of your healthcare costs following your accident. Healthcare bills fall under the “special damages” part of the claim, which refers to monetary amounts the victim was charged or has paid as a result of their accident.

Car accident victims should save all of their medical bills and receipts following their accident so that they can assess an accurate total for their medical-related damages. They can include incidental costs, like parking at the hospital deck, as long as the costs were necessary and directly related to treatment.

Individuals will be expected to render payment or an agreement for all provided medical services immediately after they are discharged. They will have to pay for these costs initially with their own insurance or out of pocket. They can also make a payment agreement with their healthcare providers to defer payment until a settlement or court order has been reached.

At-fault parties are liable for the costs of the property they damage in a car accident. Their insurer will pay the repair costs for any vehicle damage that occurred.

Some liability policies insure vehicle values at their replacement costs, which pays for the market purchase price of the vehicle rather than the typical sale price.

For vehicles damaged and repaired following an accident, the owner may be able to claim damages for the reduced value of their vehicle as a result of it having an accident history.

Individuals can also claim damages for personal effects in the vehicle that were destroyed in the accident. Broken glasses, shattered phone screens, and other damaged property can all be claimed up to a policy limit.

When an individual misses work because of an injury, the person liable for that injury may be held responsible for the lost wages they incur. This type of damages can also include the average value of commissions the worker would have earned had they been working normally.

For individuals who have long-term injuries or a permanent disability forcing them to be unable to work as a result of their accident, they may be able to claim lost future income up to the duration of their estimated life expectancy.

“General damages” in an accident claim refers to damages that do not have a direct monetary cost but nevertheless weigh on the health, well-being, and happiness of victims.

Pain and suffering damages compensate victims for the mental anguish or suffering they experienced as a result of their injuries. Victims who have a permanent injury or who are permanently disfigured by scarring may also be able to claim compensation for the suffering and diminished quality of life that resulted from their car accident.

When an individual dies in a car accident, a surviving spouse, child, domestic partner or other dependent can file a wrongful death claim in order to recover the costs of their medical treatment as well as funerary expenses, compensation for the deceased’s pain and suffering, and compensation for their survivor’s loss of comfort and companionship. Additionally, surviving family members may be able to claim the lost net income the individual would have contributed to their living situation.

Car accident deaths in California are incredibly costly in terms of both medical expenses and especially loss of earning potential. In total, the CDC estimates that CA crash deaths lead to $38 million in medical costs and $4.44 billion in lost economic contributions per year.

You can choose to file your car accident injury claim with the assistance of a San Luis Obispo car accident lawyer. Your attorney will help you assemble your claim, including evidence of your damages and — if needed — evidence that the driver they represent was at-fault for the accident.

A San Luis Obispo car accident lawyer will also negotiate with insurers on your behalf. Insurance adjusters can sometimes encourage victims to give up information that hurts their case, or the adjuster may send an unreasonably low settlement offer assuming that the victim won’t know the true value of their damages. Having a lawyer can reduce the risk that these tactics will be used on you during your claims process.

Finally, your California car accident attorney can turn your insurance claim into a lawsuit if the driver or their insurance carrier refuses to accept liability for a fair portion of your reasonable accident costs.

You can speak with a San Luis Obispo car accident lawyer during a free case review to learn more about your optimal strategy and to potentially start your claims process. Schedule your free, no obligation case review today by calling (855) 969-5671 or by using our convenient online contact form.