Where and When Car Accidents Happen Most Often 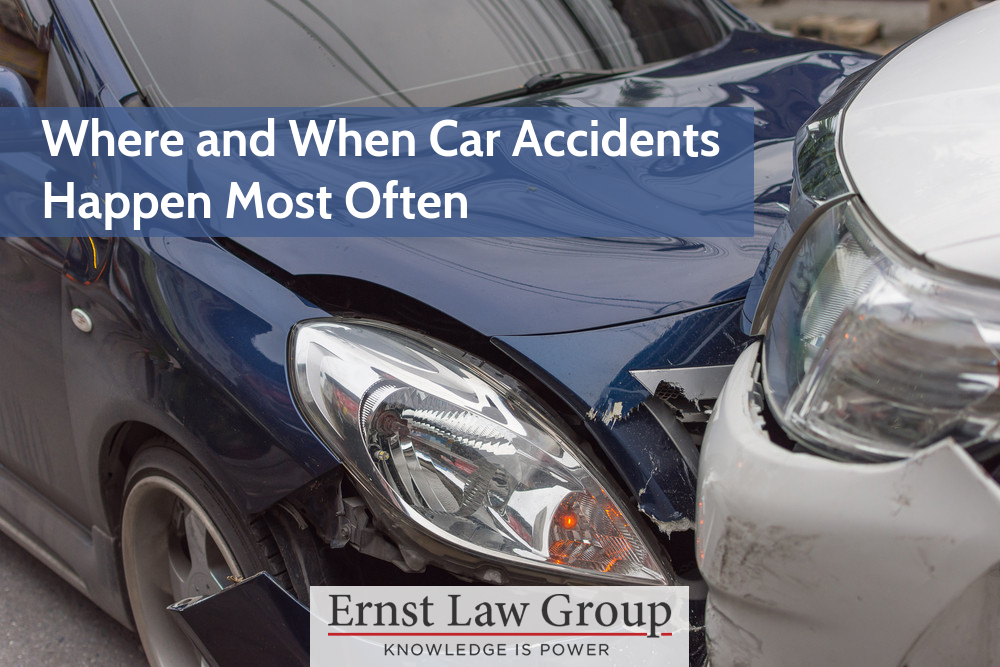 Car accidents are a daily occurrence in San Luis Obispo. You probably pass at least one every week during your commute. We almost expect to see wrecks when we’re driving on the highway, but the dangers of car accidents often hits much closer to home — literally.

Accidents happen closer to home than people may think. In fact, according to statistics, most car accidents take place within 25 miles of a person’s home. In fact, some surveys show that nearly 90 percent of car accident injuries occur within 10 miles of home. It stands to reason that this would be the case, as this is most people’s radius of typical travel.

At Ernst Law Group, our San Luis Obispo car accident lawyers know how dangerous even the seemingly most minor wrecks can be. A simple fender bender can result in broken bones, whiplash and more.

Understanding when and where car accidents are most likely to happen can help you avoid common wrecks and stay safe on the road.

The Most Dangerous Times of Day

The more cars that are on the road, the greater your risk of being involved in an accident. It should comes as no surprise that the most vulnerable times of day for drivers are in the late afternoon and early evening when commuters are returning home from work. In 2016, the greatest number of car accidents occurred between 4 and 7 p.m.

The next-highest number of accidents happened between 7 and 10 p.m. This may be attributed to the fact that this time in the evening is when people decide to go out, especially on the weekends.

What does come as a surprise is that it may not be the highways that are most dangerous. According to the National Highway Traffic Safety Administration, more accidents that proved fatal were on rural roads than on urban streets.

Looking at the Statistics in California

In total, Saturdays saw the most fatal car accidents in 2015 with 534 wrecks. Fridays were the most common days for wrecks resulting in injury, with 28,650 accidents.

In addition, October was the most common month for injurious car accidents, with 17,041 occurring during that month in 2015. December, however, was the most dangerous for fatal accidents, at 299 wrecks.

When it comes to dangerous areas in California where accidents happen, it may come as little surprise that 6 of the country’s top 50 most dangerous highways are in our state. These include:

In these rankings, it’s important to note that fatal crashes are not the only factor. But, for our purposes, they do paint an accurate picture of how dangerous these highways are.

If we zoom in closer on San Luis Obispo, there are five intersections that are especially dangerous for drivers. These are:

Staying Safe on the Road

When is the last time that you got to work and didn’t know how you had arrived there? Last week? Yesterday? This zoning out is a result of our getting into a state of autopilot after driving the same route so many times.

This zoning out can put us at greater risk of accident. Two of the most important things you can do for yourself, especially on trips close to home, are to stay aware of what is happening in and around your vehicle and securing your seat belt.

You should also make sure you’re driving defensively. Between people wanting to get home, tourists not knowing where they’re going and people who simply aren’t good drivers, the roads are full of dangerous drivers. Be ready to react to anything they do, whether they swerve in their lane or brake suddenly. Being in control means you’ll be at a lower risk for being in a wreck.

As you may have realized by now, driving around California can be dangerous. If you happen to get into a wreck, the San Luis Obispo car accident lawyers at Ernst Law Group are here to help you.

You have legal rights, especially if that accident was caused by someone’s error or negligence. Call our office today at (805) 541-0300 or contact us online to schedule a case evaluation and learn more about what our firm can do for you.

Categories
LATEST POSTS
Go to Top
Get In Touch
We represent only the injured parties against insurance companies or large corporations. We never do defense work. We never will. The defense wants to minimize the amount of money given to our clients, even when they are responsible.
Ernst Law Group
1020 Palm St, San Luis Obispo, California 93401
get directions
[email protected]
Call us
(805) 541-0300
Send us an email