What California’s Laws Have to Say About Speeding

You are here:
Categories: Car Accidents, In The NewsTaylor ErnstJanuary 9, 2019 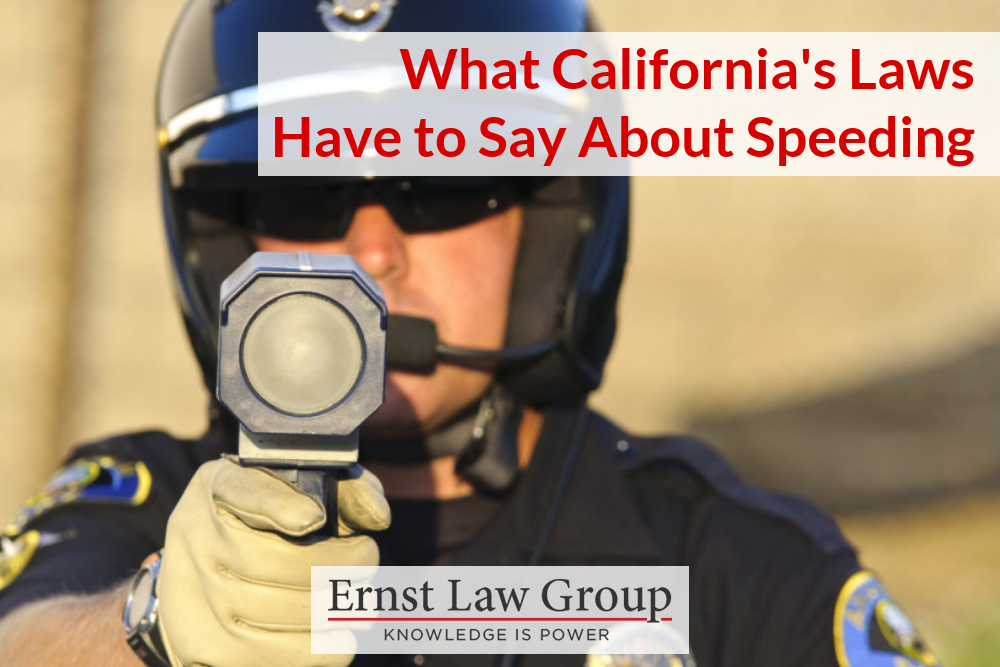 California’s seemingly endless stretches of scenic highway practically beg to be driven upon. When drivers take this enthusiasm too far, though, they are not only endangering others but putting themselves at risk of serious criminal charges.

The state of California uses several overlapping statutes to set legal speed limits — in addition to laying out the consequences for when those limits are violated. Most public roadways in the state are given general speed limits that come into effect even if there is no visible limit posted.

Ignorance of these laws is no excuse. Drivers who get involved in a car accident or exhibit reckless behavior will likely see charges if there’s evidence they were driving above the speed limits.

Our lawmakers and law enforcement agencies have good reason to take speeding so seriously. A report on 2017 fatal crashes in California found that 1,056 of them were caused by speeding drivers. That number represents a 6% increase from 2014. Looking at national data from 2005 to 2014, drivers who were speeding killed nearly the same amount of people as drivers who were intoxicated.

The San Luis Obispo car accident lawyers at our offices have seen the consequences of such accidents first hand. Accident victims and their family members can suffer major injuries, permanent disabilities, and even premature death. Without an attorney at their side to help them recover their financial losses, they may have also been saddled with a lifetime of debt.

To illustrate the legal consequences of speeding in California, take a look at the following laws along with how they might affect a car accident injury case.

The state of California uses no less than three main speeding statutes to lay out expectations to drivers and denote what the consequences are for violating these statutes.

While three different sets of laws may seem like overkill, their central goal is actually to reduce confusion. If a driver is familiar with these laws, they will know what their expected maximum speed should be regardless of the last time they saw a visible speed limit sign. The laws can also work to protect drivers facing citations; if your driving didn’t violate the letter or the spirit of the law, you may even be able to get your charges dropped.

California speeding laws are laid out as follows:

A simple rule of thumb is to use the posted speed limit you see, but reduce your speed for conditions that limit visibility or create danger. If you do not see a posted speed limit, you can assume that the expected speed limit falls into one of the roadway categories as described by the three main laws.

The California basic speeding law is quite broad and to-the-point by design. It simply states this: A person operating a motor vehicle should never drive faster, “than is reasonable or prudent having due regard for weather, visibility, the traffic on, and the surface and width of, the highway, and in no event at a speed which endangers the safety of persons or property.”

In other words, you should adjust your speed to road conditions when there are obvious risks. Road conditions like rain, heavy traffic, construction, or narrow lanes can create circumstances where the posted speed limit is still likely to make you and everyone else on the road unsafe.

Because of this law, a driver can get nailed with a speeding citation (ticket) even if they were following the posted speed limit. This scenario is especially likely if the driver gets involved in an accident where they were driving at too fast of a speed to account for road conditions.

California roadways try to keep drivers informed of designated speed limits, but drivers can always assume that they will not be allowed to drive faster than as follows:

The main purpose of this law is to get rid of gray areas while helping drivers be aware that there are limits to their speed no matter where they go. Again, ignorance of these laws is no excuse. California drivers should no that there’s no public road in the state where they are legally allowed to drive above 70 miles per hour.

These laws act similar to the absolute speed laws above but try to designate speed limits for inherently dense or risky areas. Even if there is no speed limit posted for a road or byway, a California driver can assume they are expected to maintain the following speeds:

What Happens When You Break Speeding Laws in California

California state laws lay out what is known as “base fines” for violating the above speed limits or any limits posted along a roadway.

Note that these penalty guidelines just do indeed serve as the base for what drivers can expect to pay. Many counties and municipalities have their own set of rules to add to or modify the state’s base fines laws. Drivers can also expect to pay additional court fees and “penalty assessments” on top of their base fine amount.

All that notwithstanding, here are the state’s base fine amounts according to how fast the driver was going over the speed limit at the time of their violation:

Thanks to our state’s legendarily devil-may-care drivers, there also exists a separate set of penalties for drivers caught going more than 100 miles per hour:

Drivers who violate speeding laws, “in willful or wanton disregard for the safety of persons or property,” face additional penalties. These penalties are especially likely if the driver caused a serious accident that lead to a major injury or death.

For a first reckless driving offense, a driver could face between 5 and 90 days in jail alongside fines that can range from $145 to $1,000 — added to the base fines above. A speeding violation that leads to the death of another person could also easily lead to vehicular homicide or manslaughter charges.

In addition to fines and jail time, points may be added to your license. If you accumulate a certain number of points within a specific timeframe, your license will be suspended.

Car accident victims hurt by the negligent actions of speeding drivers can find consolation through insurance claims or court lawsuits. The speeding driver can be alleged to be the primary or sole cause of the accident that led to the injury, making them potentially liable for the damages they cause. Medical bills, lost income, pain and suffering, and compensation for permanent disfigurement or disability can all be recovered through a successful personal injury claim.

If you have been hurt by a speeding driver, do not hesitate to exercise your right to seek due compensation. You can work with experienced San Luis Obispo car accident lawyers who can file a claim, negotiate with insurers, and help you navigate the court system in beneficial ways. Contact us online or by phone now to schedule your free consultation.