You are here:
Categories: Car Accidents, In The News, Wrongful DeathTaylor ErnstJune 13, 2019

The CHP confirmed today, June 12, 2019, that a wrong way driver on US 101 south of San Luis Obispo resulted in a double fatality wreck.

According to various local news sources, a 22-year-old Washington woman was driving her Ford Fiesta southbound in the northbound lane of US 101 just south of the South Higuera on and off ramps. She collided head-on with a 44-year-old Los Osos man driving a Honda Civic.  Both drivers were wearing seatbelts, but due to the force of the crash, both drivers were killed.

The images below show the South Higuera interchange. As one can see there are several intersecting roads leading to parking areas for local hiking trails, north and southbound on and off ramps, and a frontage road. 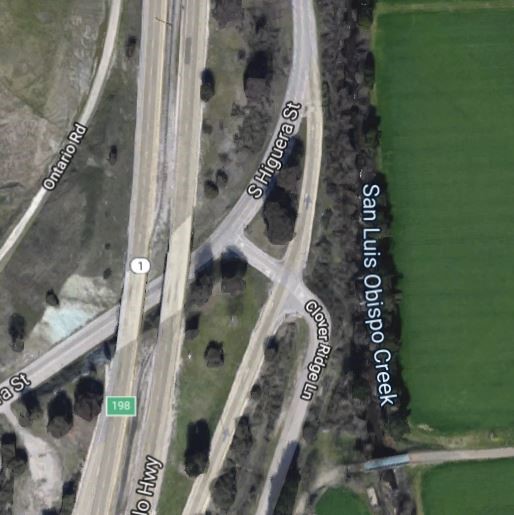 If the wrong way driver entered the northbound lanes heading south at this spot, it is likely that she entered the road as depicted below.  A driver intending to make a right turn onto Clover Ridge is faced with two options, the second of which is the frontage road. The first road one would encounter is the northbound off-ramp.  There are signs warning of entering the freeway off-ramp as “Wrong Way”, but the signed is placed directly between the off-ramp and the frontage road.  Further investigation will be needed to determine exactly what happened.

A study from the NCBI found that the reasons for wrong way crashes often depend on the time of the crash, age of the driver, day of the week and, of course, impairment and driver distraction.

In a crash of this magnitude, the CHP MAIT team will surely investigate. MAIT is the Multidisciplinary Accident Investigation Team and is an elite group of officers trained to conduct in-depth and detailed investigation of major crashes.

If an investigation shows that the wrong way driver is legally responsible for the Los Osos man’s death his heirs would be entitled to a bring a Wrongful Death claim seeking to recover damages based on the loss of their loved one.  This would include lost economic support, but most significantly, the loss of a son, father or husband.

If you have been effected by a car accident, our team is here to help. Contact our San Luis Obispo car accident lawyers today.