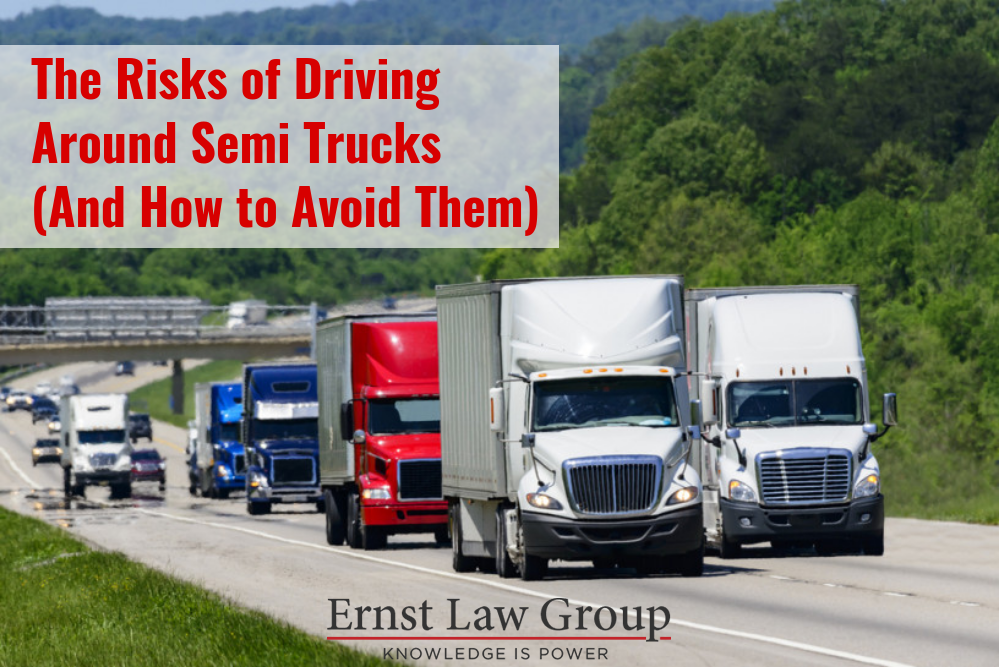 With the fifth biggest economy on the planet, the state of California depends on semi trucks and other large commercial vehicles in order to sustain its communities. Because of the dependence on large trucks, drivers on California’s roads and highways often have the unpleasant lot of sharing the road with a vehicle many times their size.

What these drivers may not realize is that the behemoth vehicles can pose unique risks to their safety. Ignoring these risks — along with the driving skills needed to mitigate them — can lead to a devastating truck accident likely to cause serious injury or death.

According to the California DOT, large trucks traveled around 15,499,902 miles every day along the state’s various interstate routes in 2009. The National Highway Travel Safety Administration (NHTSA) also reports that large trucks were directly involved in 361 road crash fatalities in California in 2017. Some of these fatal crashes could have been made less severe or avoided altogether if passenger vehicle drivers exercised greater care around large semi trucks and made smart decisions accordingly.

On the other hand, our San Luis Obispo trucking accident lawyers have seen more than their fair share of accidents caused predominantly or entirely by truck driver neglect. If you have been in a large truck accident, even one declared partially your fault, you may be eligible for a personal injury claim to recover some or all of your medical costs as well as lost wages, pain and suffering, and other damages.

Regardless of whether or not a truck driver is operating their vehicle negligently, you can take smart steps to reduce your risk of getting wrapped up in an accident with a huge semi. Use the following statistics and tips to learn more about how truck accidents are caused and you can hopefully avoid them.

California is a very large and very economically active state. By square mileage, it is the third largest state, and it is the most populous state by a wide margin. Additionally, the amount of economic activity in the state would make California the fifth-richest country in the world if it somehow counted as an independent sovereign nation rather than a U.S. state.

All of these factors make semi trucks and other large commercial a regular sight on the nation’s highways and streets. According to California’s DOT and DMV, the state registered over 5.6 million commercial trucks in 2011 as well as over 2.3 million commercial trailers. Truckers travelled an estimated 24.8 billion miles on public roads in 2008 alone.

As mentioned above, California saw 361 people tragically lose their lives in accidents with a large truck in 2017. Looking at San Luis Obispo alone, there were at 5 fatal crashes within roughly 40 miles of the city that year.

Fortunately, San Luis Obispo sits at the lower end of both overall truck accident fatalities and the rate of such fatalities per 100,000 population.

Even still, area residents should be aware of why large commercial trucks are so very dangerous.

The Risks of Semi Truck Accidents in California

Drivers must realize what makes semi truck accidents so dangerous and so likely to happen under certain conditions by learning about why they are unique compared to the average vehicle on the road.

First, semi trucks need much more time to stop their mass from a speed of 10 mph or greater compared to a typical passenger car, light truck, or SUV. While a medium-sized sedan would take around 316 feet to stop from 65 mph, it would take a semi truck around 525 feet or more to come to a complete stop. That’s over 66% more time, which someone may not expect if they weren’t made aware.

Another huge risk of semi trucks comes from their substantial size. A standard trailer measures 14 feet high and can be up to 53 feet long. The truck and trailer combined can measure more than 65 feet long and weigh upwards of 80,000 pounds!

These factors make a semi truck more difficult to maneuver and see around, in addition to affecting things like turning radius.

Their large size also means that semi trucks can cause some serious damage in a truck crash. Looking to Isaac Newton’s simple formula for impact force, Force = Mass x Acceleration, the difference in forces between a relatively small passenger vehicle and a fully loaded tractor trailer would mean that the smaller vehicle would experience a tremendous amount of force upon impact.

Heavy forces get transferred onto the smaller vehicle in a crash as well as inside of it. The car could become crushed, or it could go flying into other traffic or roadside hazards.

Whether you’re on the 1, the 101, the 41, or any number of major highways near San Luis Obispo, you can take the following measures to reduce your risk of getting in a collision with a semi truck:

If you have been in a truck accident where you suspect someone else’s neglect may have created the situation, do not hesitate to contact a truck accident attorney today. You can potentially file a personal injury claim or lawsuit against all at-fault parties, which can include truck drivers, their employers, contracting companies, truck maintenance companies, or others.

Don’t face a mountain of medical bills and crash-related costs alone. You can schedule a free, no obligation consultation from an attorney at Ernst Law Group when you contact us now using our online form or by calling (805) 541-0300.