Another Wreck at The Highway 46 “Y”

You are here:
Categories: Car Accidents, In The NewsTaylor ErnstJuly 25, 2018 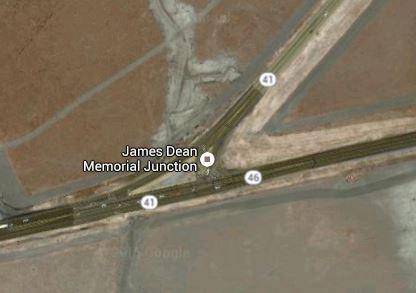 This morning yet another fatal wreck was reported at the Highway 46 Cholome “Y”.

This area is often referred to as Blood Alley due to the abnormally high number of serious crashes at the site. KSBY is reporting that a military Humvee collided head-on with a smaller car. Initial indications are that a blown tire may have caused one of the vehicles to drift into the opposing lane of travel.

The intersection of Highways 41 and 46 is known as the James Dean memorial Junction, in memory of the actor who died in a car crash in that spot on September 30, 1955. The Highway 41 turn-off from Highway 46 is a major route of travel for both passenger vehicles and big-rigs traveling to the US Highway 5, and into the Central Valley, including Fresno.

According to California Department of Transportation statistics, the average daily traffic volume at this intersection is 6,550 vehicles, with a large percentage (23.71%) being large trucks. This many vehicles being driving on narrow, often single lane roads, is a dangerous mix. At this area of the highway there are no barriers between the East- and Westbound lanes. Such a lack of barrier can be critical. There are a variety of reasons why a vehicle might cross into an opposing lane of travel. Drowsy and distracted driving accounts for a large number of traffic collisions.

The problem is even more serious when teens are behind the wheel. According to the National Highway Traffic Safety Administration, 21% of teen drivers involved in fatal crashes were distracted by their cell phone.

It is not just texting that results in distracted driving. Studies have shown that hands-free and voice activated calling features can be just as dangerous because the drivers’ attention is not on the roadway conditions.

As a society, we are keenly aware of the potential dangers of drunk driving. There is even a moral component to objections to drunk driving. We know that it is just wrong. But the same is not true for distracted driving. Many of us, probably most, have looked at a text while driving. The vast majority of us have talked on a cell phone while driving.

We think we can do it safely because we can “multi-task” and we only look away for the quickest glance. The statistics don’t bear this out. Thousands of people are being injured and killed as a result of distracted driving.

A sub-set of distracted driving is drowsy driving. Can a single one of us honestly say that we have never driven while struggling to stay alert and awake? According to the AAA Foundation for Traffic Safety, drowsy drivers are involved in an estimated 21% of fatal crashes. This is up from 16.5% in a similar 2010 study.

This is a staggering statistic. Why the increase? We don’t know for sure. Busier roads? More tired drivers on the road? Whatever the reason, this means that thousands of our family members are being killed or injured every year by drivers too tired to pay attention.

Another potential problem is unsafe passing. Because of the 55 MPH speed limit and the large number of big-rigs traveling this route the trip can be slow, especially if you’re stuck behind a slower moving truck.

As San Luis Obispo locals, all of the lawyers at Ernst Law Group have traveled this route many, many times. Over and over we see drivers becoming impatient and attempting to pass when there isn’t enough room, or even crossing double yellow lines where no passing is allowed. When two vehicles traveling at 50 to 60 MPH collide, the consequences are usually fatal. In California, passing over a double yellow line is a violation of Vehicle code § 21460.

In wreck like this, any potential lawsuit must examine several factors. First, was it a blown tire that caused the wreck, or was the tire damaged in the wreck? Careful analysis, including accident reconstruction experts will be necessary to answer this question. Second, if a blown tire was the cause, why did the tire blow? Was the tire worn? Or, was the tire defective.

There has been extensive litigation over wrecks caused by defective tires. Finally, one must ask if this wreck would have been avoided by the presence of a barrier between the lanes.

Plans are in the works to turn the Highway 41/46 interchange into an overpass, but funding has delayed the project for years. Hopefully, soon, a barrier will be installed to help prevent tragedies such as this.

If you are involved in a wreck, call a San Luis Obispo car accident lawyer at Ernst Law Group today at (805) 541-0300 for a free, no-obligation consultation.